Several of the biggest fire hazards in your home all live in your kitchen. The oven, the stovetop, your toaster… when you think of all of the heat sources your kitchen contains, it’s almost a wonder that it doesn’t burst into flames on the regular. Joking aside, the kitchen is usually a pretty safe place so long as you keep an eye on things. That doesn’t mean that you should ignore fire safety rules when in the kitchen, of course – knowing how to handle a kitchen fire can mean the difference between a scare and a tragedy. 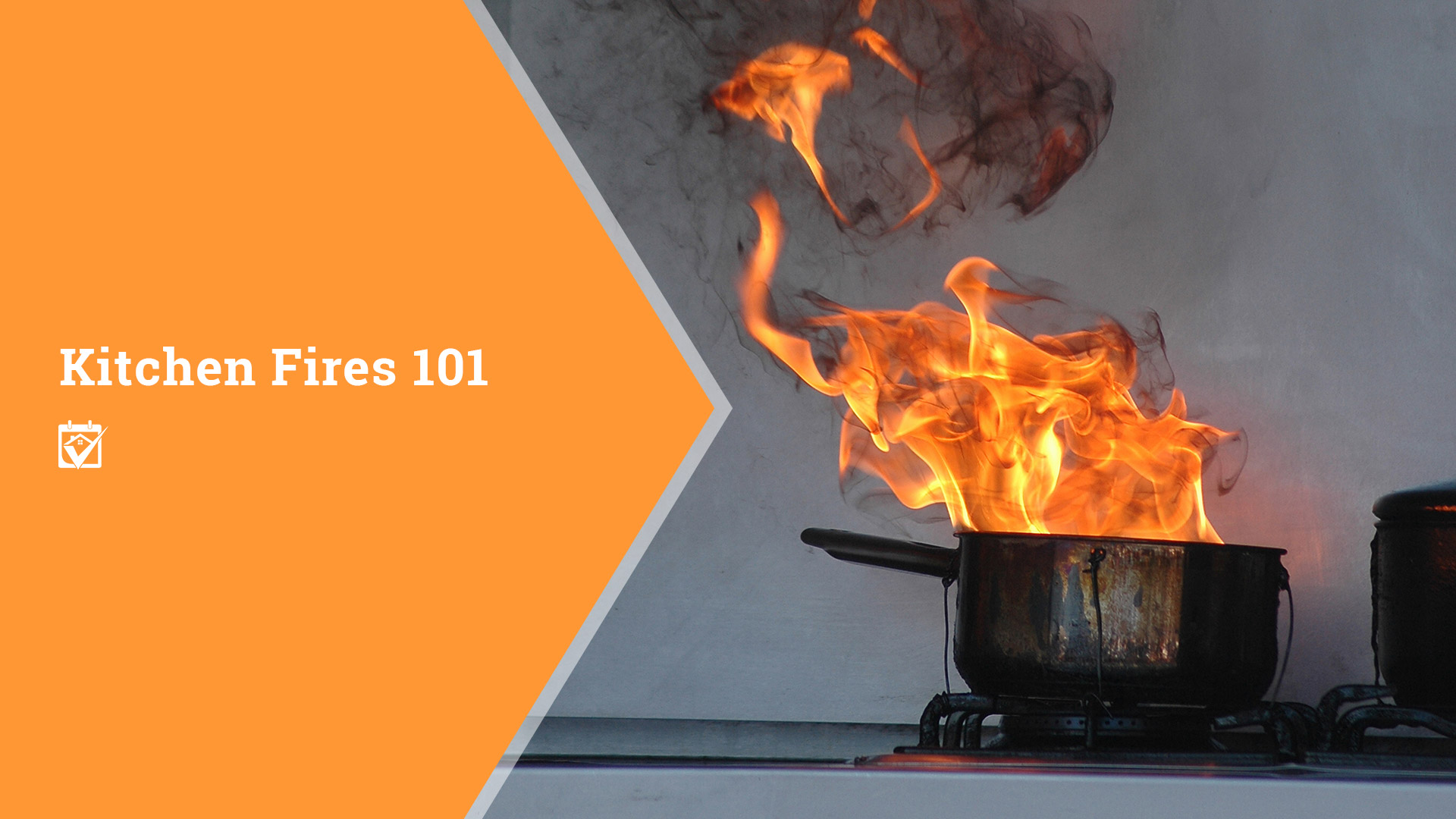 There are a number of potential causes of kitchen fires. There are the usual fire hazards such as electrical shorts, but you also have kitchen-specific risks such as splashing oil or something falling onto a heating element. Because there are so many potential causes of a kitchen fire, your fire safety measures need to be a bit wider reaching than what you might use for other rooms in your house.

A smoke detector is important in the kitchen, as is a fire extinguisher that you can access easily. Make sure you choose the right fire extinguisher, though; opt for an ABC fire extinguisher if possible. These can be used on Class A (trash/wood/paper), Class B (oil and liquids) and Class C (electrical equipment) fires. Establish an area where you can put oven mitts, cookbooks and similar materials far enough away from the stovetop to prevent any of them from falling onto a hot surface. Inspect kitchen appliances regularly for damaged cords or other fire hazards and replace anything that could present a danger.

It can be easy to panic when you see huge flames on your stove-top. However, unless your entire kitchen is made of tissue paper doused in lighter fluid, it's unlikely that your entire kitchen will instantly go up in flames. Stay calm. Many stove-top fires will burn themselves out quickly on their own, and your job is just to make sure nobody gets hurt and nothing else catches fire.

If a fire breaks out in your oven, your first instinct is likely to open the oven and try to put the fire out. That’s one of the worst things that you can do, though; opening the oven provides much-needed air to the fire and can make it significantly worse. Just opening the oven door can cause the fire to explode outward, potentially burning you and spreading to surrounding surfaces.

Instead, turn off the oven and leave the door closed. This will limit the availability of oxygen, causing the fire to die down and eventually go out on its own. Keep an eye on the fire, though, since if it doesn’t start dying out or seems to be getting stronger, you’ll likely need to call the fire department to deal with it.

Fires on the Stovetop

If a fire breaks out on the stovetop, there are a few things that you can do. If it’s a very small fire such as a grease fire in a pan, simply putting a metal lid on the pan may be enough to put the fire out. Slightly larger fires can be doused using baking soda, but do NOT use flour… though you may have heard that flour is okay to use, flour is finely ground dried plant material and is actually very flammable. Your fire extinguisher is also an option, as is calling the fire department before things get too far out of control.

One key part of fire safety is making sure that your smoke detectors, fire extinguishers and other fire safety equipment stays in good working order in case you need them. It's a good idea to run a check on all your smoke detectors to make sure they are operational and have sufficient battery charge. Make sure any fire safety equipment is available and easily reachable while you're cooking. And also make sure that the oven interior, stove-top, and smoke hood are cleaned and decreased -- not only is excessive grease a fire hazard, but it also can impart off flavors to your food.

For ADA assistance, please email compliance@placester.com. If you experience difficulty in accessing any part of this website, email us, and we will work with you to provide the information you seek through an alternate communication method.

Sign Up
Already a User? Sign In
You have been successfully registered
Please check your email.
Go to the homepage
Sorry something went wrong
Please try again.
Try again

Change password
Your password has been successfully reseted.
Go to the homepage
Sorry something went wrong
Please try again.
Try again
Already a User? Sign In